Unity and Integrity (in India)

I would agree with Mr. T.M. Krishna when he says most music criticisms today are quite facile. Most criticisms would, as Mr. Krishna says, speak generally about the Ragas, Kritis sung, the accompanists and whether they were good or bad with the help of certain adjectives to describe their voice, reach, range, etc. In fact, most music criticisms look alike, provided the names of musicians and Ragas change. This comment may look very sweeping; however that seems to be the trend with a few exceptions. I do not know of Tamil Nadu; but in the context of Karnataka at least, one will have to agree with what Mr. Krishna says.

The descriptions as mentioned above (of a musician, his/her voice range, etc) are necessary. What is more necessary however, is to place the musician in the context of the whole musical scenario. Matters such as the lineage, which the musician traces her/himself in; trends in musical education of which the musician is a part; the differences between the Guru and the disciple in styles of singing, reasons for those differences or the lack of it; why a musician is considered bad, good or great; if there was any experimentation or departures from the past; the response of the audience to a musician either in terms of audience turn-up or applause or both; Sabhas which provide the aegis and the quantum of their contribution to music; number and nature of sponsors; as also the whole turn the music concert format or music industry is taking - these could be some of the more important issues to discuss while placing the musician in context. These should not be considered allied topics 'outside' the field of music. These ARE the factors determining music, its production, presentation and consumption. This requires good knowledge of the field and also an intellectual courage both on part of the critic and the Daily to publish. Part-timers, who shuttle from concert to concert for the sake of reporting may not have the required time to ponder upon those details. It is not the number of concerts that are reported that is important; but it is the quality of analysis. It is not the name and fame of the musician, whose concert is being reported that is important; more important is that the reader rather get an idea as to what is happening to the musical field after going through some 4-5 reviews. This is hardly the case in the present music journalism. It would be a delight to see a different kind of analysis.

The Inner Logic of Political Systems in India”, in Richard G. Fox, (ed.),

Moments from Princely Mysore”, published in Journal of Karnataka 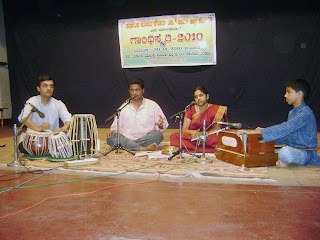 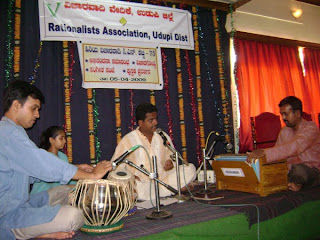 Literature and music were two prominent fields of activities that got institutionalized in late nineteenth and early twentieth centuries. These two fields of activities continuously exchanged resources from each other. As this process was underway, there were intense debates among the elites of the society as to the rights and wrongs of accepting certain elements and omitting some other, from the framework of those cultural activities. This paper looks at certain significant points of negotiations in the process of institutionalization of cultural fields of activities in northern Karnataka, taking into account a genre of Kannada literature, Dasa Sahitya, and a broad framework of classical music.
Betageri Krishna Sharma, a litterateur from North Karnataka, reminisced the occasion of the National Congress Session in the year 1924, in Belgaum,

…In North Karnataka there is no voice that sings Carnatic music; there are no ears that can listen and enjoy that music. A middle and mixed breed of Hindustani and Carnatic music – just as the middle breed between a horse and a donkey – has rusted the ears of the people here…(Krishna Sharma 1936: 682)

The first thing that catches our attention here is the certainty of the opinion that once Karnataka is unified, in North Karnataka one could certainly witness the blossoming of Carnatic music. With this assurance in mind Thatti also has an assurance for himself that a unified Karnataka would usher in a personality modelled on Tyagaraja, for Carnatic music in Karnataka. Until then, the Kannadigas were to study the life and lyrics of Tyagaraja, which would yield the desired result ultimately. Hence, it was not in unison with which the elites of North Karnataka chose Dasa Sahitya as a medium through which Carnatic style could be achieved. Scholars like Thatti attributed more of lyrical value to Dasa Sahitya and therefore, it automatically lost the qualification to be music per se, though he was clear that Carnatic music in Karnataka should be in Kannada.
Venkata Rao says in his book published in 1957 that his efforts in establishing Carnatic music did not bear fruit even till then (Venkata Rao 1999: 28). It was true that the stray efforts of Kannadiga nationalists did not find any success in ushering in either Carnatic music or Dasa Sahitya in North Karnataka. What was more powerful was the machinery of the state to patronize cultural forms, whether it was the princely states or the colonial state. The existence of small princely states such as Aundh, Miraj, Ichalakaranji, Kolhapur, Sangli, Kurundwad and Jamakhandi etc. (Nadkarni 1983: 6) and their patronization of music in late nineteenth and early twentieth century brought Hindustani music in a big way to Maharashtra and the southern Maratha. These tiny states in the Deccan became centres of musical activity in the 19th century (Deshpande 1987: 2175). Musicians such as Abdul Karim Khan had made this place their home. On the other hand, the colonial government implemented policies to foster Hindustani music in this area. The officials of the administrative machinery too, patronized Hindustani music substantially. The words of Mudavidu Krishna Rao,[25] a Kannada nationalist, are quite important in reconstructing the history of music in Karnataka. With a sense of loss, he laments:
…Carnatic style of music has disappeared among the common educated populace of our region [Dharwar]. Carnatic style of singing was heard even till 1895. In a few months after the establishment of Karnataka Vidyavardhaka Sangha for the protection of the Karnataka culture, Late Phatak Gurunatha Rao, an eminent lawyer of this place established a Carnatic music school. Chimmalagi Venkanna, who was a Vidya Visharada in Carnatic music and who was a student of the famous Narayana Swamy of Tanjore, was the teacher here. Several young men had trained here. Around 1893 Venkanna died accidentally in the house of Phatak, when that part of the house was struck by lightening. This, in a way, was a lightening that struck the very Carnatic style of music in this place…Moreover, some of the Marathi officials who came over to Dharwar, had some special liking for Hindustani music and put up efforts to spread that music. By the time the Carnatic music school was on the wane because of the death of Chimmalagi Venkanna, a Marathi gentleman by name Balavanta Rao Sahasrabuddhe came here as Inspector of Education. He had a great regard and respect for Hindustani music. He had learnt Hindustani music and was an expert in that. With inspiration from him, another music school started here. But this one imparted only Hindustani music. Meanwhile the Government approved the teaching of Hindustani music in the Kannada Training College here. The famous Hindustani musician Late Bhaskar Buva Bakhale was appointed as the music teacher in that College. When he was free, he used to work in the music school as well. The teachers who got trained in this college, and were taught music by Bhaskar Buva, helped Hindustani music spread even in the interiors…thus, one of the best and important part of Karnataka culture has been destroyed in this region (Mudavidu Krishna Rao, quoted in Dharwadkar 1975: 37-39).
Thus, the state patronage in different forms ushered in and created tastes for a new form of music called Hindustani music in North Karnataka and the efforts of the Kannada nationalists were nullified by an effective state intervention. By the time Karnataka was unified in 1956, Hindustani music in north Karnataka was a well-established form of classical music. However, the idiom provided by the early Kannada nationalists was adopted by the later Kannada nationalists such as A.Na. Krishna Rao in the 1960s, who were quite instrumental for the birth of a musical genre called ‘light music’ in Kannada.